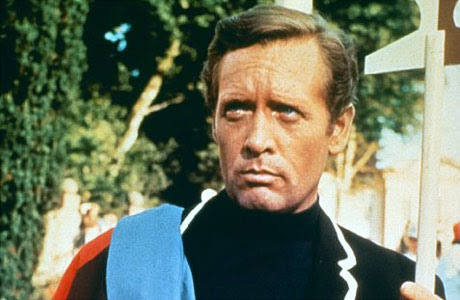 Patrick McGoohan as "The Prisoner"

Patrick McGoohan passed away January 13th. He was best known for his role as Number Six in the psycological/sci-fi spy drama "The Prisoner".  The entire series consisted of only 17 episodes but is a cult classic. Before he passed away McGoohan had paved the way for a new updated Prisoner series. AMC and ITC shot the series and it is due to later this year.

Aside from the Prisoner, the American born Irish McGoohan did many many T.V. shows in front and behind the camera. He starred in four Columbo movies and was a good friend with Peter Falk.  McGoohan also did movies like Silver Streak and Braveheart. He is known to have turned down the role of James Bond in Dr. No.  MaGoohan's career spanned four decades.

McGoohan is survived by his wife, three daughters and five grandchildren.
Posted by Dane Bramage at 10:31 PM

Email ThisBlogThis!Share to TwitterShare to FacebookShare to Pinterest
Labels: In Memoriam, Movies, Television