Email ThisBlogThis!Share to TwitterShare to FacebookShare to Pinterest
Labels: Websites

I read "The Watchmen" graphic novel and thought what an incredible piece of comic art it was. Writing and drawing were superb! And I thought "Man, this would make an awesome film!"

Over twenty years later the dream has been realized and a complete Watchmen film is in the can awaiting release by Warner Brothers on March 6th, 2009. Or is it?

This is not the first attempt at making a Watchmen movie.  Another film was planned by Fox back in 1991. They hired Larry Gordon to produce it  but the project stalled.  Gordon  made a deal with Warner Brothers in 2006 but apparently Fox held the legal rights to the property  and has moved to completely block the release of the film.  Keep your fingers crossed and pray they get it resolved because the biggest losers in this will be moviegoers. 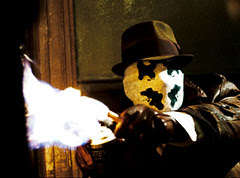 Blogged with the Flock Browser
Posted by Dane Bramage at 7:50 AM No comments: